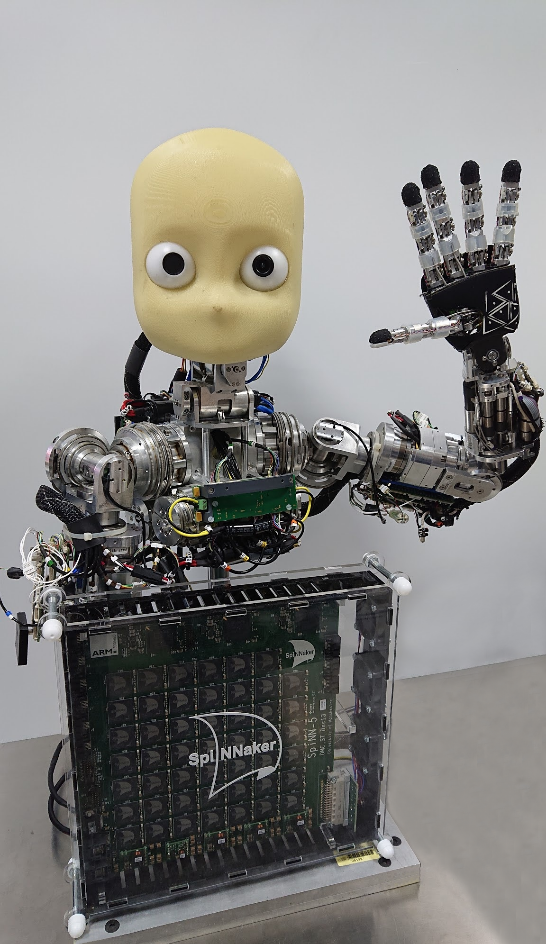 The NeuiCub platform is composed of an iCub robot controlled through a SpiNNaker neuromorphic board (SpiNN-5). It is meant for neurorobotic experiments that involve detailed brain models implemented with spiking neural networks.The SpiNNaker neuromorphic platform comprises arrays of low-power, parallel custom chips (each containing 18 ARM9 cores) running a digital software simulation of neurons and synapses. The SpiNN-5 board includes 48 processors. The system’s philosophy focuses on large brain simulation and spike communication in real time whilst scaling up to biological scale. A standard SpiNNaker neural model is primarily configured through the provision of the “sPyNNaker” implementation of the Python-based PyNN modeling framework.The version of the iCub humanoid robot available at the BioRobotics Institute is provided with one head that has 6 degrees of freedom (dofs), 3 for eyes and 3 for neck control), two arms (7 dofs each) and one hand (3 dofs for the thumb, 2 for the index, 2 for the middle finger, 1 for the coupled ring and little finger, 1 for the adduction/abduction). The iCub robot available at the BioRobotics Insitute is equipped also with an inertial sensor, two dragonfly cameras and tactile sensors in the hand.